The Client is an innovative web-based, for-profit company in America that allows application integration among end-users. They provide workflows that automate the use of web applications together or translate between APIs.

Ecommerce was already in existence when the Client found its place in the industry. The big guys were dominating the scene, enjoying the trend on software integration which businesses were rapidly adopting. Being new in the circle, their first few years in the market were a real struggle.

However, the multi-apps usage sprung issues like systems not syncing, strayed data and high cost of maintenance and developments to get several applications to work well together. The Client knew that they had the solutions to the problem, but what they needed was a tool that can help them massively get these solutions to the doorsteps of their targets in need.

Kazehi closely worked with the Client and tailored a campaign suited according to their requirements. A two-term lead generation campaign was closed which composed three work phases:

ACCOUNT RESEARCH AND SELECTION
To guarantee the quality of data to be used in the campaign, the list underwent thorough customer profiling, which involved manually validating and verifying each database record and field.

1. The Client wanted to target companies that were either currently evaluating or within a six month period, and had in place or a projected budget for the upgrade.
2. The target account specifications were further detailed into prospects with a need for a SAAS based solution.
3. Kazehi accomplished the target account list using an in-house database.

ACCOUNT AND PROSPECT PROFILING
With its award-winning lead generation expertise, Kazehi was well-positioned to help the client meet the two main challenges brought on by its recent rebranding program. In a nutshell, the lead generation activities of the campaign included:

1. The Client pointed decision makers: Business Owners, Ecommerce Managers, IT Manager/Director, Chief Financial Officer, Finance Manager
2. Most qualified companies are those with a test budget and currently evaluating.
3. Profiled records were submitted to the Client for approval. 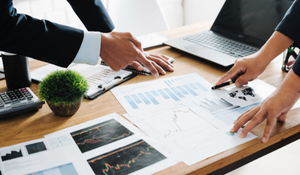